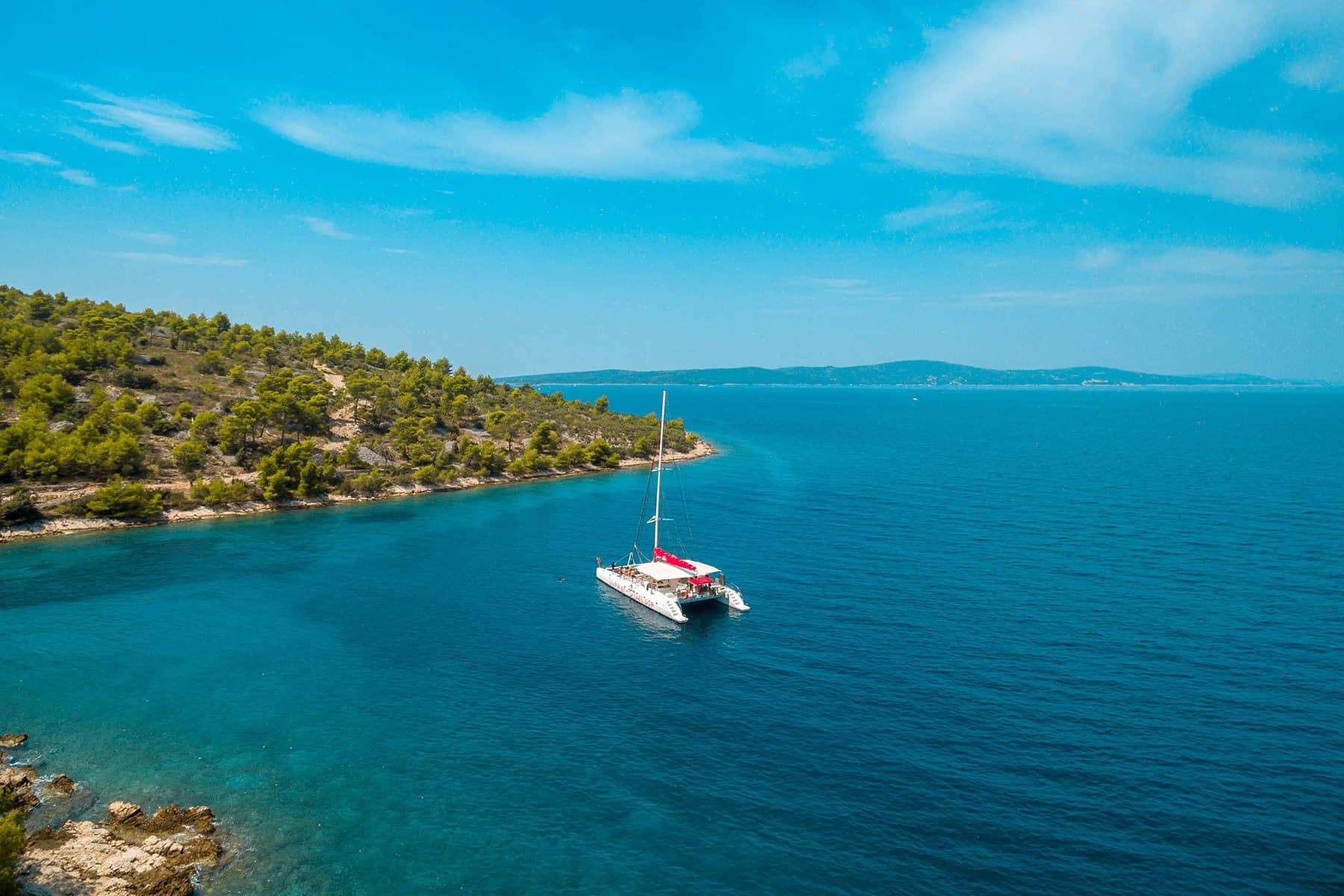 Hello again! After our time in Zadar, we headed off to Split for phase 2 of our trip. One of the highlights of our time there, was the day trip we took to the island of Brač off the coast. We chose a company called Summer Blues for this trip. We had done a great deal of research (both online before our trip and while walking the promenade talking with promoters) so we were confident in our decision. (It didn’t disappoint).

The beautiful Catamaran boat for our trip!

They offer two different trips to the islands (and if we had more time / money, we probably would’ve done the other one too!). We chose the trip to Bol and Golden Horn Beach. This tour only runs on Monday, Wednesday and Friday and costs 75 euros per person. You can also take a trip to Hvar & Pakleni Islands. This tour only runs Tuesday, Thursday and Saturday and costs 83 euros per person. (Children 4-14 are half price for both trips, and 0-4 are free).

You meet the tour at the dock at 8:30am along the Riva. The boat departs the harbor at 9:00am and it’s about a 1 hour ride to the island of Brač. The boat cruise started off with a welcome drink–either a rum & coke or a screwdriver. It seemed a bit early for hard alcohol but we weren’t going to turn down a free drink on our vacation! They also gave us sandwiches that were pre-wrapped. Some people ate them on the boat and others saved them for later.

Once we arrived to Bol, the boat docked and we walked 5 minutes to a waiting bus. We took the bus to the highest point on the island of Brač–Vidova Gora. The ride took almost 30 minutes to the top, but our guide on the bus told us a bit about the island’s history along the way. Brač is the 3rd largest island in the Adriatic and home to almost 14,000 people. It’s main industries include tourism, fishing and producing wine at local vineyards on the island. They are also very famous for their white stone–which is claimed to have been imported to Washington D.C. to make the White House! Once the bus couldn’t take us anymore of the way up, we walked 15 minutes to the viewpoint! You are able to see the golden horn beach below from Vidova Gora.

After 15 minutes of exploring and photo taking, we got back on the bus to head down to Zlatni Rat (aka Golden horn beach) up close. It took almost 40 minutes to get to down to the beach. Our bus actually broke down part of the way and we had to wait for a replacement bus to come grab us. It didn’t take too long and the tour continued on. (This was the only glitch of the day). Once we got dropped off at Golden Horn beach, we had to walk a while before actually getting to the beach. There are bathrooms in the wooded area behind the beach, but they cost money to use–so be sure to have some coins on hand!

We had a little less than 2 hours to enjoy some time on the beach. We learned on our tour that the shape of the beach actually changes depending on the wind. Sometime’s it’s straight, other time’s it’s curved. The beach was much larger than I had imagined, and it took almost 10 minutes to walk from the start to the end (not counting the wooded area at the beginning).

Once our time was done on the beach, we followed the walkway back to the docks in Bol to meet the group. (We even snagged a key-chain made of the famous white stone for our collection en route). When we were all back on the boat, we departed for our cruise around the island. They gave all of us a salad with some chicken and veggies in it for lunch. (Very simple but filling enough). They also served some cake and fruit for desert–so there were plenty of snacks until the end! Part of the reason we chose this company was the unlimited soft drinks (which included beer)! We totally took advantage of the free drinks (note the two beers I’m holding in the picture above).

After a little cruising, we stopped at a swim spot called Lučice. We were able to jump off the boat into the water and swim around for a while. We had about an hour or so at the first swim spot before heading to a second location in a bay off the island. In both areas we were completely alone with just our group. There were no other tours or boats anchored and we had the area to ourselves. It is still unbelievable to me how crystal clear the Adriatic is!

After our final swim, it was time to head back to Split. We were able to enjoy the sunset from the boat as we cruised back. They played some music while we enjoyed our last beers and chatted with the new friends we had made along the trip!

Overall, I highly recommend this boat cruise for anyone visiting Split (who isn’t planning on staying on the islands). Although it was a little out of our normal travel budget, it was incredibly worth it! It was one of the highlights of our trip through Croatia. The views we experienced alone were worth it (not to mention the food & unlimited beer).

30% deposit - Upon confirmation
100% amount - 30 days before the charter date
Service fee: 500 Eur (for rentals with own food and drinks purchase /supply)

Cancellation policy in case of severe weather, impossible sea/sail conditions
Summer Blues remains a right to cancel the charter if harbor authorities for weather reasons forbid the navigation. In that case the clients receive the full refund. In all other weather conditions Summer Blues will provide the customer ordered service and cannot be responsible for the cancellations out of these rules. Summer Blues will always recommend the sailing route according to daily weather conditions and will be cooperative to customer wishes.


We use cookies on our website to give you the most relevant experience by remembering your preferences and repeat visits. By clicking “Accept All”, you consent to the use of ALL the cookies. However, you may visit "Cookie Settings" to provide a controlled consent.
Cookie SettingsAccept All
Manage consent

This website uses cookies to improve your experience while you navigate through the website. Out of these, the cookies that are categorized as necessary are stored on your browser as they are essential for the working of basic functionalities of the website. We also use third-party cookies that help us analyze and understand how you use this website. These cookies will be stored in your browser only with your consent. You also have the option to opt-out of these cookies. But opting out of some of these cookies may affect your browsing experience.
Necessary Always Enabled
Necessary cookies are absolutely essential for the website to function properly. These cookies ensure basic functionalities and security features of the website, anonymously.
Analytics
Analytical cookies are used to understand how visitors interact with the website. These cookies help provide information on metrics the number of visitors, bounce rate, traffic source, etc.
Others
Other uncategorized cookies are those that are being analyzed and have not been classified into a category as yet.
Functional
Functional cookies help to perform certain functionalities like sharing the content of the website on social media platforms, collect feedbacks, and other third-party features.
Advertisement
Advertisement cookies are used to provide visitors with relevant ads and marketing campaigns. These cookies track visitors across websites and collect information to provide customized ads.
SAVE & ACCEPT
Powered by